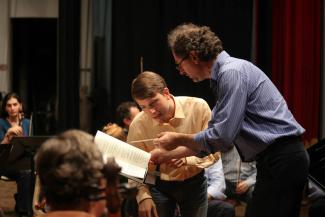 I've always been writing music. When, as a boy, I was playing Dungeons & Dragons with friends, I imagined a soundtrack that accompanied every character, every action, every scene.

Later, already during the composition studies, I would have realized that my musical imagination always took shape from the fantastic world that surrounds me. Fantastic in the sense that every moment of existence, with its light and dark colors, has an inevitable accompaniment in the imagination.

The world of the Elves, the fantastic Chariots, the Masks, Pinocchio but also the small rites of daily life such as the ticking of clocks, dreams and the enchantment of the mountain. I like to fly (those who know me know that I am very passionate about flying) between the different worlds that surround me. For this reason, even in music I wanted to see for myself the world seen by the orchestra professors (more than thirty years of orchestra at the Teatro alla Scala), that seen from the podium of the conductor and that of the composer.

I like to combine music with the drawings of life. Maestro Morricone invited me to see the world also from the side of the composers of soundtracks and, in my way, I accepted the invitation. My "Carro Fantastico" was performed at the Teatro alla Scala, an extraordinary experience.

I wrote a lot for the symphony orchestra and its colors remain indispensable for me. But my Mac and Logic Pro collect a lot of my improvises. For some years now I have been getting closer and closer to a palette where orchestral colors and digital samples meet.

Dungeons & Dragons returns to my imagination, and that idea of ​​creating soundtracks that accompany the stories of dragons, dwarves and half-elves is taking place in my musical imagination. My Mac is already overflowing with ideas !!